Founded in March 2011, RRJ Capital (“RRJ”) is a global investment firm with a strategic focus in key industries, including healthcare, financial institutions, technology, and logistics. With offices in Singapore and Hong Kong, RRJ’s portfolio companies are diversified across Asia Pacific, Europe and the United States.

Over the years, RRJ has rapidly expanded into many regions. When a company expands abroad so quickly, its different overseas entities will need to have a centralized system to be able to easily communicate with one another. If not, certain challenges will arise. The following are some pain points raised by RRJ before engaging Adventus:

1.    Need for Remote-friendly IT Infrastructure
If a company is only located in 1 country, a local server setup (on-premise) would be sufficient. However, for a global company like RRJ, with entities in more than one country, it would be advantageous to have a remote server setup (on cloud).

3.    Need for Remote Collaboration Tools
With employees working from different parts of the world, RRJ wanted to explore the possibility of migrating to Microsoft 365 as there were many potential remote collaborative tools such as Microsoft Teams, Microsoft SharePoint etc.

4.    High Cost – Server Infrastructure
In general, it is rather costly to have an on-premise IT Infrastructure. This is because the costs of the hardware, hardware rack, electricity, cooling system and even the manpower cost needed to maintain and host the server on-premise are all being factored in. Before engaging Adventus, this cost was a concern for RRJ as well.

5.    Single Point of Failure – No High Availability
Having a local server setup (on-premise) has a significant amount of risks:

To address the challenges above, Adventus devised a strategy using Microsoft 365 to move RRJ Capital towards Cloud and to adopt a serverless environment.

Microsoft 365 is an all-rounder suite of apps that focuses on productivity and collaboration, bringing together all existing applications (Word, Excel, PowerPoint, Outlook, Teams, OneDrive, SharePoint, OneNote, Publisher, Sway, and Access) to be stored on the cloud.

Solutions and services in our strategy for RRJ include: 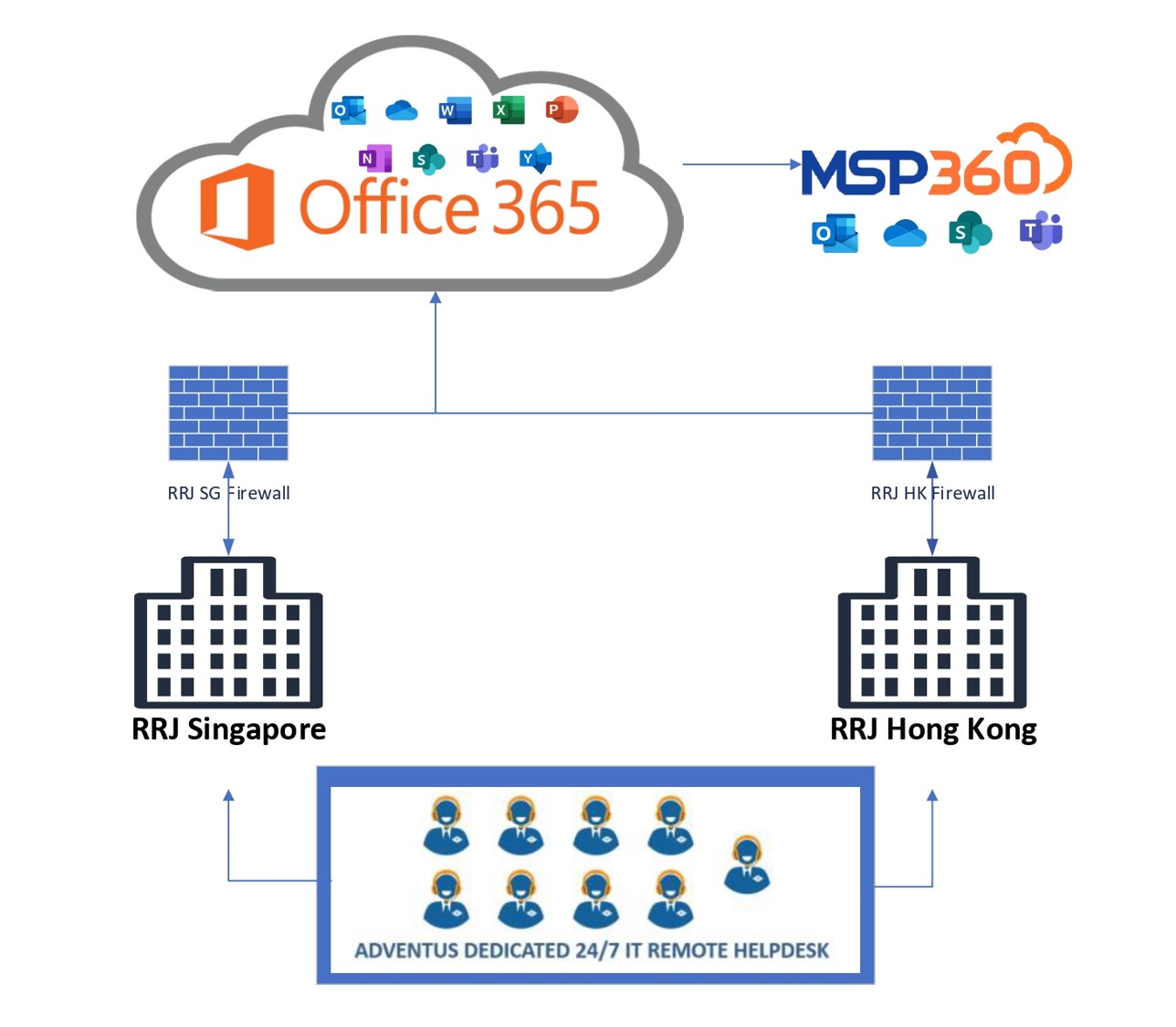 Adventus has a very professional and responsive team. I like how fast their service desk respond to our IT issues or request. They also have deep knowledge of IT risk management requirement of MAS licensee, which is very important for us. After switching our IT service to Adventus, we also implement some additional IT controls which gave us peace of mind in a world where cyber security risks are becoming more prevalent. We highly recommend Adventus to any company who is looking for an IT service provider.
says Ms Lorraine Wong, Chief Financial Officer of RRJ Capital